At the foot of the Jacques-Cartier Bridge, a grey stone building older than the bridge itself seems to defy time… The most perceptive will see the coat of arms of Montréal, as well as its date of construction -1887-, on its southern side. This curious building is an old pumping station, the Craig Pumping Station, whose story is told during the exhibit  “The Mysteries of the Craig“, at the C.I.EAU until May.

What is the purpose of a pumping station?

In the 19th century, the world of civil engineering underwent a revolution with the appearance of the first steam engines. Before being replaced by electricity, this source of thermal (but also kinetic) energy powered the pumps of the very first aqueduct networks in the world’s major cities. These pumps are used to bring untreated water from a river to the drinking water production plant, while other pumps are used to pressurize the water system to our taps. Sewers often reach the treatment plant at a significant depth. Pumping stations are used to lift the wastewater to treatment ponds, which are located on the surface.

The Craig and Riverside stations are a bit special: they were built to prevent the river from flooding the city by backflowing through the sewers. Since sewage treatment plants did not exist at the time, Montréal’s sewers ended up in the St. Lawrence River by gravity.  During the winter, the formation of ice jams on the river hindered the normal flow of water, which then went down the sewers and caused major annual flooding.

To address the problem of seasonal flooding, the Craig and Riverside stations were built slightly upstream from their respective outflows to the river in order to pump wastewater across a floodgate installed in the sewer main – the latter protecting the rest of the sewer system from a back-up caused by seasonal ice jams:

“The general concept of the Craig Pumping Station is that a chute is installed in the collector sewer. A valve is placed in the chute and interrupts the continuity of the sewer. Stopped by the valve, the water passes through a conduit to the pumps from which it is elevated and discharged into the river (1)” 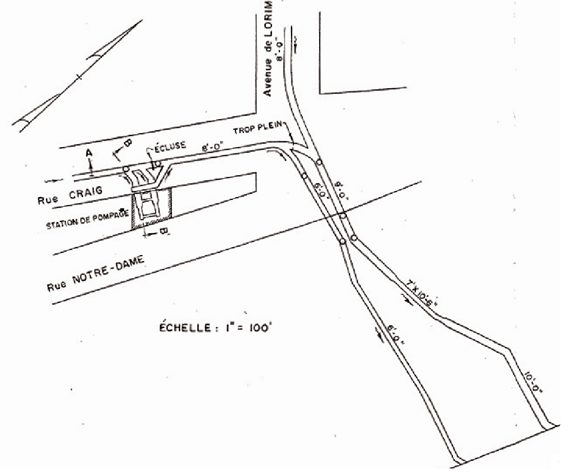 The first floor of the building housed the steam production system that powered the pump motors:

In the basement, you will find the pumping equipment as well as all the steam piping necessary for their operation: 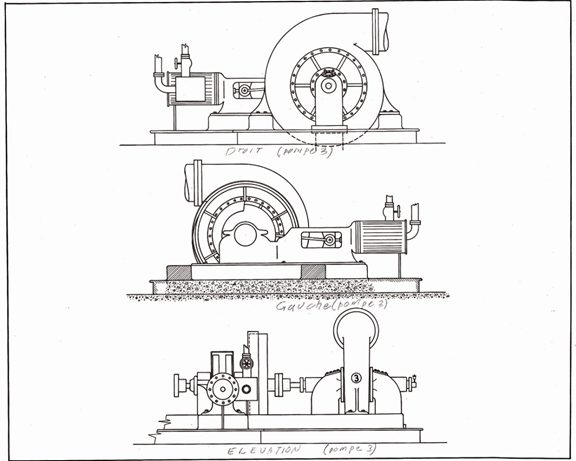 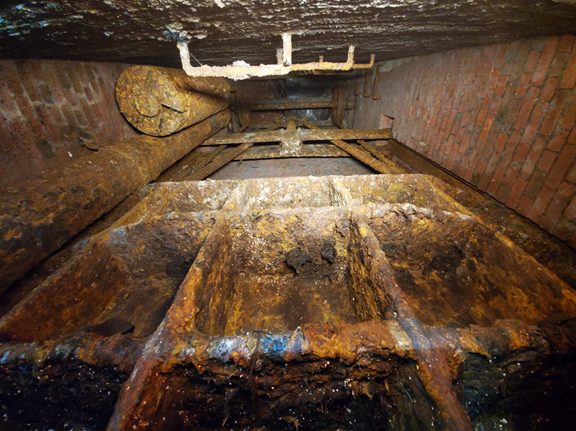 Why is the Craig no longer in operation today?

In the 20th century, major works were undertaken to control seasonal flooding. Between 1954 and 1959, the St. Lawrence Seaway was built. The dredging of the river and the addition of the Beauharnois and Cornwall dams helped to control the flow of the river throughout the year. In addition, the icebreakers that have been operating year-round between Québec City and Montréal since the 1960s have considerably reduced the formation of ice jams.

However, it was the modernization of the Montréal Urban Community (MUC) sewer system in the 1980s that rendered the Craig Pumping Station obsolete. With the construction of a network of sewer interceptors and the commissioning of a wastewater treatment plant in 1987, all sewer outflows that had previously flowed into the river were now intercepted, and their water was then sent to Rivière-des-Prairies for treatment.  Now that the sewers were no longer connected to the river and the flooding problem was solved, the plant was deemed no longer useful and was abandoned shortly thereafter.

Despite its current state of neglect, it is the oldest structure of its kind still standing in the City of Montreal’s water and sewer system.